1750hrs: Flying back to Duxford from Coltishall, 19 Squadron Duxford (Spitfires) were given mid-air instructions to proceed to a vectored position just off the east coast at Clacton-on-Sea Essex. At first there was no sign of the raiders, but it was not long before a flight made contact with 70 He111 and about 50 Bf110s just south of Harwich. Joined by another flight, a strong and intense battle emerged with weaving planes and long glowing lines of tracer above the coastline. One He111 was brought down over the sea, but a number of Bf110s crashed into the Essex countryside.

The Team Fusion boys are really working wonders with the sim and it is starting to look like what might have been.

Our mission initially started with WB blowing his engine, us circling North Weald and itching to get on station.

The hold up meant we arrived in perfect time to see the 19 boys stream by with full contrails heading for the incoming bandits.

Seeing them come in over our left wing and head off towards the bad guys gave us some confidence that I've not felt for the last few missions where its felt like 5 vs 105....

Pretty soon 19 spotted some of the raiders and a proper BoB furball began.

Rolling round I had a look at the bombers which sneaker below the fighters. I started to maneuver over the top and position for an attack. I'd heard WB getting stuck in, Brig had the 50 110's under control, so lets bag a Heinkel.

All seemed to be going well and then tracer was whistling past my ears and I'd picked up some of the 110's Brigstock had generously decided to leave for me.

The fight quickly decended to 4-5000 ft. I manage to give a couple of guys the good news, which resulted in them smoking, but no kills.

WB had done his best with the He-111's and Osprey was making the most of the superior numbers, we had to get some target practise done.

Eventually I was winchester, so headed back to North Weald with the sun setting over an eventful day.

Landing I realised I had no clue on how many snappers I had a go at. The other lads were the same. For me this was as good as it gets. Flying in with another (any) squadron makes it more believable for me. The furball off Southend was relentless, but also ended up with that "alone" feeling.

I'll be trying this formula next time.
Posted by Keets at 23:26 No comments: 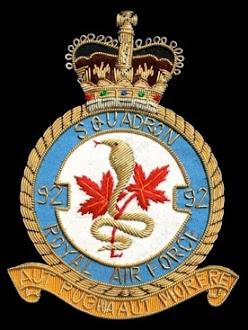